A while back I started to wonder if there were many horse and pony books specifically written for adults. I knew of those by Joyce Stranger and K. M. Peyton and a couple by Dorian Williams and of course the racing crime thrillers by Dick Francis and company...but were there more? Well, a few months later, after both discussing this on the ponymadbooklovers forum and doing a bit of research, I have found that, although the publishing world is not bursting at the seams with adult horse novels, there are a fair amount of books out there.

What is surprising is that a) They are mostly written by American writers and b) a large proportion of them are romance.

Why should that be? Well, with the American angle, I think it has always been true that the American horse book scene is more wide-ranging than that of the UK, not really concentrating on the young girl/pony club element around which the British pony book centres. It has always had a wider frame, with more male central characters, more older characters and is more eclectic in theme. It also seems to concentrate a lot more on racing than the UK books and it is probably this disclipline which attracts a more adult theme (in fact a large proportion of the UK adult horse books are set in the world of racing too). It is not surprisingly therefore that the horse book in America should spill over into the adult market.

As for romance, I'm not sure as to that at all? Anybody who has a theory let me know!

But apart from the crime thrillers, romances and racing stories there is a lot more on offer, from fantasy by the likes of Judith Tarr (she even wrote a book where a sorcerer transforms a man into an Arabian stallion...now wouldn't you like to be able to do that yourself!), historical works, mysteries and much more.
If you would like to see my list of adult horse related fiction please visit the new page on my website here I have also included a number of books which were originally aimed at older children but are particularly suitable for the more mature reader. I hope it will give you some new ideas for reading material...it certainly has done so for me. And if you know of any other adult horse fiction you think should be added to the list please let me know or visit the adult pony book thread on the forum.
Just got a few more titles (thanks to all who provided them) which I haven't had time to add to the website yet:
Ride a Proud Horse by Barbara Morgenroth
Bold Venture (UK title Bluebird) by Dorothy V.S. Jackson
Ins and Outs by Barbara Moss
Ride a Dark Horse by Lynn Hall (older teenager)
To search for the any of the books on Amazon you can use this link: 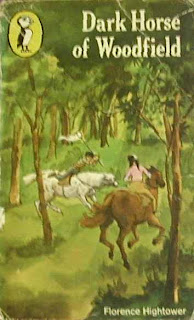 In a discussion of American pony books recently I was recommended to read the book Dark Horse of Woodfield by Florence Hightower. Not a book I had heard of before ( I hadn't even heard of the author) but as it was likened to a Noel Streatfield book (an author I love) I thought I would give it a go. Apart from a few exceptions I prefer English pony books to American ones, but I was very pleasantly surprised by this one. Yes, it definitely had some of the quirky family characters often seen in Noel Streatfield novels. But perhaps even more the family reminded me of the rather eccentric family in Enid Bagnold's National Velvet.
On the whole though, the eccentric family is more of a British institution, which is possibly why I so liked the book, which despite being set in the USA, somehow feels more British than American to me!
The story is set in the 1930s, in the midst of the Depression. The once prominent and wealthy Armistead family have now fallen on hard times and young Maggie is determined to win the top prize in the Junior Hunter Stake on her pony Star, so she can use the prize money to help buy her Aunt's horse back (sold because they needed the money).
The family are on the whole horse mad, with generations of superb riders, of which Maggie is the youngest. Most of the characters are brilliantly and humourously portrayed, with my favourites being the imperious old horse obsessed Grandmother who once made conversation with a horse at a tea party and Maggie's younger brother Bugsy who is a business man in the making, and is hoping to make money by breeding butterflies in his dead grandfather's study. But even minor characters, such as Maggie's teacher 'Fried Egg' and the unscrupulous car dealer George, are superbly drawn and made real.
It is probably not an out and out pony book as the main plot is not the schooling of Star, but the struggle to make money for the entry fee for the show. There is also a mystery to solve....that of deceased Uncle Wally, black sheep of the family (who loved poetry rather than horses) who, by writing a poem which the family took offence too, caused a family rift and then inadvertantly tragedy. His poems are now famous and good money would be paid for various letters he left behind. But they have mysteriously disappeared. The strands of these subplots all come together, as Maggie learns to appreciate Uncle Wally's poems in order to enter a prize winning essay contest, the secret of the offending poem is revealed, and the children's money making endeavours are the inadvertant key to solving the mystery.
The author manages to create an atmospheric family history. She mentions just a few lines of Uncle Wally's poems, but you start to imagine there really is a book with those poems in, and you yearn to read in its entirety the controversial poem which caused a rift between Wally and the other family members. But the author tantalisingly never reveals it!
As well as superb writing, the book is very funny. There are some great horsy anecdotes, a pony follows is master to school and gets stuck in the door, a sociable horse joins in with a ladies tea party, and the family's horses break free of their field to turn up at the horseshow to give their support! Yes, even the equine characters are eccentric in this book!
So, although not along the lines of the classic pony story and by a little known author who really is a 'dark horse' in the pony book world, if you enjoy quirky novels with interesting characters you will love this book, and I would highly recommend it. I don't think the author wrote any other pony stories but if you know differently please let me know so I can seek them out!
Posted by Claire at 11:25 5 comments: