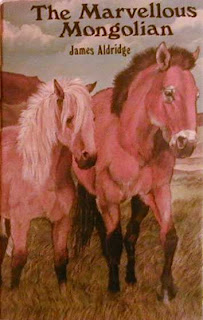 Just been reading this book which must be one of the most unusual pony books I've read in a long while. Why? Well, first of all it is about a breed of horse which I've never come across mentioned in a pony book before - the Przewalski horse (also known as the Wild Mongolian Horse). This is a very rare breed which is thought to be the only true wild horse breed in the world. It must also be the hardest breed to spell too!

Secondly the book is set in many different countries, mainly in Mongolia (as to be expected) and Wales. The Welsh setting may seem a natural backdrop for a pony story, but have there been any other pony books set in Asia? Pony books rarely feature countries other than the UK, USA or Australia. The customs and setting of the Mongolian part of the story make for an eye-opening and very interesting read.

Thirdly the way the book is written is very unusual. The whole story is narrated through letters between a girl in Wales and a boy in Mongolia. This type of narrative was very common in British literature around the 18th century but today is extremely unusual. The nearest I've seen to it is in Judith Berrisford's Jackie books where the author uses Jackie's occaisional letters to her parents to update the story and move the plot forward. It may seem a little off-putting to the reader but it actually makes for a very interesting read as we see the characters and customs of two children from different sides of the world.

And lastly, in a genre that is often criticised for its cliched story-lines, the plot is also very unusual. It concerns a wild Mongolian stallion who is captured and sent to a Welsh nature reserve as part of a breeding program. The stallion comes from a wild herd which was was first spotted by a Mongolian boy. The stallion is hoped to breed with a Shetland pony who has been looked after by a girl in Wales. The boy and girl begin to exchange letters, and through them the whole story of what happens next unfolds.

Hopefully I will have time to do a full review of the book on my website. In the meantime I would recommend it as an excellent read especially if you are looking for something different.
Posted by Claire at 21:53

I haven't read this one...another to add to the list!

The only other book I can think of that is set in Mongolia is Diane Lee Wilson's excellent I Rode a Horse of Milk White Jade...still in print in the US, and it looks very inexpensive used from Amazon in the UK (or even better, free from the library!). As much historic fiction as horse book, worth a look.

Haven't seen that one before so thanx for the info. Another one to add to my list too! I will probably enjoy it as I like historical books.

This was one of my favorites. I remember weeping uncontrollably at the sad parts - so much that my mother had to comfort me! This is a good one.