Review - Joe and the Lightning Pony by Victoria Eveleigh 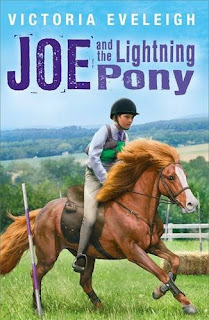 Book 2 in the Joe series which began with Joe and the Hidden Horseshoe.  Joe is now happily settled in his countryside home with a dog and pony of his own. He has grown up a lot since first moving there and even gets on a lot better with his younger sister Emily, as both of them join the local pony club and Emily gets a pony of her own. Joe discovers that Lightning is excellent at mounted games and he determines to get into the Pony Club team for the Prince Phillip Cup. The only downside to his happiness is that he knows he will soon outgrow Lightning. But he consoles himself with the knowledge that when Emily outgrows her own pony she will move on to Lightning and so the mare will stay in the family - enabling him to get a larger pony on which to fulfill his riding ambitions. But then a tragedy changes all their plans and it looks like Joe may have to choose between keeping his beloved Lightning and pursuing his ambitions…

As readers of the blog and website may recall, I reviewed the first of this series a little while ago and although I thought the book was very good and well-written, I never really warmed to the character of Joe. Because his 'spoilt brat' attitude did improve towards the end of Book 1 I was interested to see if I found him more likeable in this second instalment. The answer is a resounding yes! Joe has grown up a lot and learnt to take responsibility for his life and its problems instead of blaming those around him. He has become pro-active in overcoming problems instead of just moaning about them, which makes him more like the pony book heroes and heroines of my youth. I also like the fact that he and sister Emily have begun to get on well together and there is a nice little dynamic going on between them as they practice gymkhana games together. However although the author has made Joe more likeable in this book it is not as if a magic wand has been waved and he has assumed a completely new identity. At the beginning of the book he is still not perfect and traces of the old Joe show through - as with his jealousy of Emily when she gets her own pony and makes great strides with her riding and he is no longer the 'horsy expert' of the family. This makes his eventual improvement much more realistic. His imperfections make him a real rounded character but are no longer overwhelming the plot.

The character of Emily is also much more rounded out and given more prominence in this instalment. Indeed her story sometimes takes centre stage. I feel this is a good thing as it will help those little girl readers who prefer identifying with a female than male character. Sadly for me, Mum, whom I felt could have been developed as a very interesting character (and someone for us adult readers to identify with) is not used as much in this book. Her sub-plot with the horse sanctuary also seems a bit under-used and undeveloped. I’m hoping we see more of her in the last book in the trilogy.

So much for the characters, but what about the book itself? This story is just as well-written and interesting as the first instalment. Once again Victoria Eveleigh has provided a detailed and realistic backdrop to the story, this time that of mounted games and the Prince Phillip Cup. Strangely, there are not many pony stories which actually concentrate on this particular disclipline and it was very interesting to read about the training, such as learning to vault, and the various tactics for the different games, as well as the actual procedure for getting to the finals of the Cup. As with book 1, this is authentic and comes from real knowledge of the subject.

Some readers had complained that book 1 in the series  was a little slow, and felt more of a set-up to the series proper. This book however is a lot more fast paced with more excitement and a lot more tension and trauma. The action really gets going! It also has a lot more traditional pony story horse content with Pony Club, riding practice and the like taking prominence.

I still feel like Joe leads something of a charmed life, as his central dilemma is solved fairly easily. But perhaps we can put this down to the (possibly) magic horseshoe! As I read through the book I was at first a little disappointed that the magic horseshoe sub-plot seemed to have disappeared but there is a very neat little twist at the end which brings the horseshoe right back into focus. It will be interesting to see how Joe’s most ambitious horseshoe wish is fulfilled in the last book of the trilogy!

In summary, in Joe and the Lightning Pony the author has taken a good start to the series and developed it further into a page turning and highly readable second instalment. Any concerns that I’d had in book 1 about the character of Joe and the lack of tension have been swept aside in this book. It has everything needed for a great traditional pony story and will keep readers of all ages entertained.

Read more, make comments or vote on the book on the chat forum review section
Posted by Claire at 14:46