Hi all a round-up of our latest book reviews. Books all reviewed by my fellow reviewer 'Tintin'. Please add any comments either here, or on our chat forum review section (link at the bottom of the review). Thanks as always to Tintin for his entertaining and thoughtful reviews.
If you haven't read any of our reviews before, we have our own 'horseshoe' rating system from 1 horseshoes (poor) to 5 horseshoes (excellent) with a special gold cup trophy to outstanding reads and the horse dropping booby prize to the very dire! Hope you enjoy the reviews. 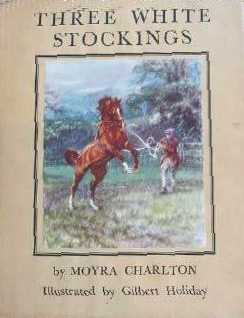 I do like a good horse biography, and this is distinctly above average

In the days of National Service it was considerably easier to get in the Army than out of it. One of the few methods was to be discharged as "temprementally unsuited to military service", the horse equivalent was terser "cast for vice" although it amounted to the same thing.

The hero and narrator of the book, Chum, a chesnut gelding with the three white stockings of the title was one such horse.

The book follows him from birth to late middle age as he recounts his life to a young colt while out at grass.

Chum has a tendency to be a little bit full of himself which the author gently brings out. He is literally headstrong and spends the best part of the Great War in the Remount Depot and is eventually cast due to his constantly evading the bit and unwillingness to stand in the ranks. The staff are firm, but never cruel with him, but eventually lose patience and let him go.

Prior to the war he had been being trained to be a hunter and he is fortunate to be bought by a lady (clearly the author - as the introduction alludes to) who hunts and point to points him.

All the action takes place in Southern Ireland and any Irish reader, or reader familiar with Ireland, who is at all horsey will have the floodgates of recall opened by the many places described or mentioned. There are some oblique references to the troubles (the distant sound of gunfire, a burnt out house, being stoned by youths)but the overall impression is one of gentleness and hospitality

There is a good cross section of horse life here showing both the similarities and differences with the modern day. Horse ailments and injuries, transporting horses and the problems of having to hack out and back to hunt and race meets in a day when motor horse boxes were very rare - although there is a useful description of riding in horse boxes from the horse point of view which is the only one I have ever seen. There is an interlude with the life of ladybird the Welsh Pony, whose life is even more interesting than that of Chum.

Comments on the book - a map of Ireland would have been nice to accompany the beautiful and spirited illustrations! Unlike most later pony books it is written for those with a pretty good knowledge of horses. Very good attempt to get into the mind of a horse and explore the differences to the mind of the rider/handler. Charming on the simple pleasures of a horse's life.

Rating - easily a 4 horseshoe book, well written, realistic, very descriptive and informative, likeable characters you care about. Interesting aside/health warning on the impact of personal taste on reviews - I think if I had been half as fond of point to point as the author I would have given it 5!


You can read more comments and vote on the book: here

More on Moyra Charlton and her books here


Book Review by 'Tintin' - Bonny the Pony by Ruth Clarke 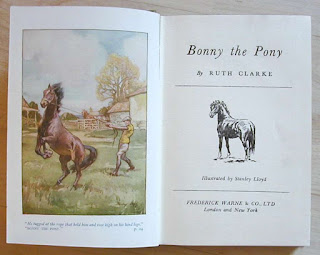 Read more comment and vote on the book: here


Book Review by 'Tintin' - A Ceremonial Death by Thomas Jenkins 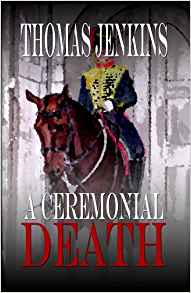 Told in the first person by a private detective, who is definitely a gentleman.

The Troop take over public duties at Horseguards, Whitehall while the Household Cavalry are at their annual camp. Unfortunately someone cuts the head off the NCO of the guard just before the 4pm daily inspection.

This is extremely disruptive to the well ordered, even idyllic, life of the unit.

The civil police are called in to investigate, but the case is complex (theoretically almost all the guard could have done it)and the CID Inspector is obnoxious (typical of a certain sort of Met officer who knows everything and despises all other cap badges) The victim is also obnoxious. The men close ranks and clam up.

Fortunately, one of the officers is in the same club as the narrator and invites him to stay at the Mess. The detective also invites his nephew to join the party of Cadets on work experience at the barracks.

The life of the mounted battery is much more interesting than the rather squalid murder, but the two are interestingly interwoven. The Riding School scenes are brilliant. The author rides and hunts and spent some time fact finding with the Kings Troop and it shows.

The gunners are likeable and realistic, sadly the horses don't get characters. Because of the subject matter there is rather a lot of the seamier side of army life, but the good far outweighs it. Although there is no sexual content, there is some rather heavy sexual banter, which although typical, some people may find upsetting. There is not a lot of it though.

I found the book quite uplifting. 5 horseshoes, but very near Gold Cup for me.

Happily there are more stories of Prince Alberts Troop, but regrettably only this one in physical format.


Read more comments and vote on the book: here
Posted by Claire at 17:40