Book Review - If I Won a Pony by Eve Paege 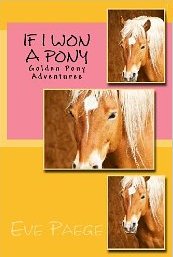 Leo is amazed when she wins first prize in a pony magazine competition – a real life pony! Instead of the posh, expensive ponies she is offered, she falls in love with a scruffy neglected pony at an auction. She persuades the magazine editor to buy No Name as she calls him. After cleaning and tending the pony she finds out he is good looking, friendly and a good ride. But if things seem too good to be true they usually are: when Leo finds out No Name’s true identity she realizes his life may be in danger and she sets off to rescue him at all costs…

From the 1990s onwards, traditional style pony stories seemed to almost disappear. For younger readers, fluffy unrealistic stories about magic ponies, unicorns and the like, dominated. For older children the scenario was even worse, as style over substance books with poor moral values and scenarios which were in some ways just as unrealistic as the fantasy pony stories flooded the market. It seemed that the traditional pony book had all but disappeared - these new books celebrated winning, looking good and having the latest gear rather than caring for your pony and your friends. Even drugs, sex and the celebrity mad culture seemed to be infiltrating this once-wholesome genre! However, I am glad to say in the last couple of years, traditional pony stories seem to be making a come back. (Why this is so is a matter for separate discussion, but it does gladden the heart of a reader brought up on them)

If I won a Pony is firmly in the mould of the traditional pony story. It contains all the stalwart plot strands of the old pony stories, from winning a pony in a competition, to rescuing a neglected animal, to saving a pony from the knackers. It also celebrates a lot of the good values that the older pony story used to expound: I like the way that the heroine chooses a scruffy unwanted pony rather than the expensive and glam ponies she has lined up in front of her. I also like the way she goes to a huge amount of trouble in order to save her beloved pony. Her rather naughty tendency to lie to people to get her own way is eventually punished, but her remorse and caring attitude are rewarded in the end. These are great messages to be passed on to young horsy readers.

Something that also really strikes me as being reminiscent of the traditional pony stories (and indeed the old holiday adventure stories of Enid Blyton, Arthur Ransome and the like) is the independence of the child characters and the fact that they exist for the most part in a world without parents. This is perhaps not realistic in today’s society of ‘helicopter parents’ hovering over their kids night and day. But it does highlight the fact that children can be independent, can think and do things for themselves without relying on their parents all the time. Perhaps this is as much an alien concept for many of today’s kids as the fantasy worlds they seem to like reading about! Perhaps the freedom of the children in this story will only be seen as an escape for the young reader from what must be quite an oppressive atmosphere, rather than something they could actually aspire to. But it does show there is an option for thinking and doings things for yourself. Another good message which this book conveys.

It is quite a tricky proposition for an author to combine a traditional type story and traditional values with a style modern enough to keep today’s children interested. Eve Paege has managed to inject such a fast pace into the story that even easily bored readers will be swept along. There is plenty of horsy action and scenarios in the story from auctions, to schooling, to hacking, to competitions, to horse rescue, people rescue… and lots, lots more! The author has packed a lot into this book and again this will encourage easily distracted young readers to keep on turning the pages. For the older/adult reader this will perhaps be a little too frenetic and I must say all that galloping about the countryside left me a bit exhausted! I would have perhaps liked a little more character depth and development, but I realize this is personal taste, as I am always drawn to more introspective novels. And of course younger readers do not want too much soul-searching and the like clogging up their story line. The author has I think managed the mix of traditional and modern just right to appeal to her target audience.

I do really like the underlying humour of the book, which has some great comic characters such as the pink-obsessed journalist and the wig-wearing ‘PC Plod’ character, who reminds me a little of Mr. Goon in the old Enid Blyton mystery stories. This light-hearted tone again will appeal to the modern young reader.

In short, this is a good combination of traditional plot lines and values within the framework of a modern, light-hearted and fast–paced story. It will appeal most to children of the pre-teen and early teen age group, and is I feel especially good for encouraging easily bored and reluctant readers to pick up a book. It will also suit older readers who love a rollicking pony adventure story without too much introspection.
Posted by Claire at 18:19