Book Review - Too Many Ponies by Sheena Wilkinson 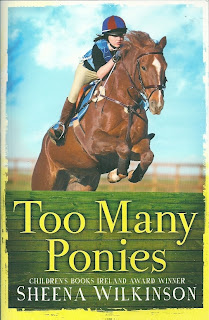 This was an exciting review for me for a number of reasons. First, because the author's earlier pony novel Taking Flight was one of the best I have read in recent years and I was really looking forward to reading her first pony book for younger reader, but also because I was in the enviable position of being able to read and review the book before it was in the shops from a proof copy and was asked to provide a quote for the book cover. It was nice to be a part (albeit an extremely little part) of the publishing process. Plus the author has very kindly thanked the users of the website/readers of this blog for their support in the acknowledgments section of the book. So thanks for the thanks Sheena!


But enough of the blether and here is the actual review.....

Lucy keeps her pony stabled at Rosevale, a horse sanctuary run by her friend Aiden's dad (who is in fact Declan of the author's earlier novels, Taking Flight and Grounded!) The children, although dissimilar in character - Lucy brash and outgoing; Aiden quiet and cautious - are friends, united by their love of horses. However when the pair move up into the comprehensive school things begin to change. Lucy is drawn to the glam (but shallow) world of the posh stables frequented by the horsy girls she meets at the school, whilst Aiden is bullied for his love of ponies.

When an eccentric newcomer to the district organises an eventing competition, Rosevale decides to put together a team in order to try and win much needed money. But the strain of the competition causes more problems. Aiden finds his small store of confidence ebbing away and begins to lose his nerve, whilst Lucy becomes so wrapped up in the idea of winning and looking good she forgets the true purpose of the competition and puts a pony in danger. Can both children overcome their problems in time for the big event? Or is disaster just around the corner?

Sheena Wilkinson’s earlier pony novels, Taking Flight and Grounded, were aimed at the young adult market. Both were compelling page-turning reads, full of gritty realism. When I found out a few months ago that the author was writing a pony story for younger readers I was happy to hear it, as that particular niche in the market is sadly over-populated by third rate pony stories and desperately needs more well written, intelligent novels to offer to young pony mad readers.

Too Many Ponies certainly lived up to my expectations. Ostensibly it’s a fairly standard competition type plot in which a team of riders go through the usual trials and tribulations of preparing and then taking part in a big event. However there is plenty of meat on the bare bones of this plot which will get young readers thinking at the same time as they are enjoying the story. Although not quite as gritty or psychologically complex as her works for older children – which is to be expected given the younger readership the book is aimed at - this story is certainly full of realism and depth. It tackles serious issues such as bullying and losing confidence in oneself. The competitive element is also tempered by the backdrop of the horse sanctuary where most of the story takes place – this gives a nice rounded view of ponies as not just winning machines, but living creatures which need care and love - and thus prevents the rather hard-nosed, unsavoury attitude which can overtake many a competition plot line. The writing itself is of a high quality and superior to most books in the genre. It is easy to see how Sheena Wilkinson is one of the few writers of equine fiction to appear on the ‘mainstream radar’ and win awards.

But for me the real excellence of the book is provided by the two superbly drawn main characters. Like the author’s first horse novel, Taking Flight, the book follows the fortunes of both a male and female lead character. First of all brownie points to the author for once again giving a male prominence in a pony story. This is something that is sadly rare in a modern pony book, especially one for younger readers. I have had more than one parent complain to me that there is not much on offer nowadays for their male horse-mad children. Too Many Ponies however, with its excellent male character Aiden, will appeal to boys as well as girls.

Again, as in Taking Flight, the male lead Aiden is actually more sympathetic and likeable than the female. Aiden is a great character and both girls and boys will warm to him immediately.
His character is wrapped up in the whole issue of masculine identity. Unlike America, where riding is actually seen as highly masculine (and rightly so considering the element of danger involved!), in the UK ponies have always been considered mainly the province of the female species. This has been exacerbated in recent years, with the preponderance of fluffy, glittery stories about magic ponies and the equally female fashion for dressing up ponies in colours to match outfits (a fashion that is actually amusingly castigated in Too Many Ponies). This can be a big problem for male horse-lovers, whose favourite past-time may even be considered cissy. Too Many Ponies delves into this dilemma as Aiden becomes bullied at school for his love of ponies and is dubbed 'My Little Pony Boy', with the brilliant metaphor of a pink pony (the symbol of all that is girly in ponies and pony books) causing devastating damage to his ego. The bullies’ assault on Aiden’s masculinity is compounded by his own worry that he is a coward, as he begins to lose his nerve for jumping. In the book, he must overcome both these external and internal obstacles to prove that he can be a real boy and love ponies at the same time. This battle provides much of the interest of the story.

The character of Lucy, although less sympathetic than Aiden, is perhaps more complex and her storyline more subtle. Whilst Aiden has a lack of confidence in himself, she has rather too much and is in danger of turning into the sort of brash unfeeling teenager I have seen in many recent pony novels, in which winning or looking good on your horse seems to matter more than the horse itself. Near the beginning of the book she feels exasperated by the fact that keeping her pony on a rescue farm means that she is constantly reminded of the fact that ponies are being hurt and mistreated. She wants to bury her head in the sand and forget these problems and just have fun with her pony. She is drawn to the rather shallow but ostensibly fun and glamourous lifestyle of the stables at Sunnyside Farm where the girls, led by the deliciously snotty Jade, are colour co-cordinated with their ponies and won’t even allow pony-less children into their club. When Lucy extols the virtues of Sunnyside to her parents, her mum replies that it “sounds revolting” and hopefully the reader will agree!

Very cleverly the author has made Jade the sister of one of Aiden’s bullies. As Aiden’s confidence in himself is undermined by the bullies, so Jade and her friends also threaten to exacerbate Lucy’s own slight faults of selfishness and shallowness, and turn her into something akin to a pony book anti-heroine. The idea of winning the riding competition in order to raise money for the sanctuary becomes lost in the desire to win for its own sake. Lucy becomes more selfish and risks her pony’s health and the team itself in order to give herself a chance to shine. With a lesser author this might turn us off the character, but Sheena Wilkinson has dropped enough little clues into the story so that we realise there is enough good left in Lucy to redeem her. We root for her growing realization of her faults and her eventual salvation, just as we root for Aiden to regain his confidence and overcome the bullies.

The character of Erin is also a very interesting addition to the cast. She is something of a foil to Lucy, being the actual archetypal heroine of the pony novel: pony-less but pony mad, not overly brash and kind. In making her a minor female character and Lucy the main, the author has gone a little outside the comfort zone of a traditional pony book, but her innovative move works really well. The reader recognizes Erin’s worth and compares her to Lucy. And knows that Erin should be Lucy’s friend and role model rather than the obnoxious Jade - who represents all that is bad in a horsy girl (and indeed in horsy novels per se).

However despite the depth of the characters and their problems in Too Many Ponies, this does not mean the story is at all slow or ponderous. The pace is fast enough to keep readers interested throughout and the story intriguing enough to keep those pages turning. There is plenty of varied equine action: rescued ponies, cross country training and the competition itself. The fact that many of the problems of the two children are universal (bullying, lack of confidence, making wrong decisions) will ensure that the book will also appeal to readers outside of the genre, and like the author’s previous equine stories I think this one will also gain prominence outside of the pony book genre.

If you have already read Taking Flight and Grounded there is also another reason to read this book - you will be pleased to re-acquaint yourself with the character of Declan who appears here in a supporting role as Aiden's father. Although, as I said earlier, because it is aimed at a younger readership it may not have the complexity of those novels, it has enough depth and is well written enough to be read by the same age group as those who enjoyed Declan’s earlier adventures. Sheena Wilkinson has avoided making the book too babyish or simplistic, or of under-estimating the intelligence of her young readers. And just as older readers will be able to appreciate Too Many Ponies, so will it’s younger readers be able to move on to Taking Flight and Grounded as they grow a little older, and will enjoy finding out the background of the character of Declan.

For me, this is certain to be one of the best pony stories of the year for younger horse-lovers. Given the tendency for many authors of modern pony stories to take the easy route and spice up a hastily cobbled together story with a thick masking-coat of glamour or sensationalism, there are precious few pony books being written now which tell a traditional pony story in an interesting and thoughtful way, whilst at the same time keeping readers turning the pages, eager to find what happens next. Sheena Wilkinson has achieved this feat. For this age group certainly, there aren’t too many pony stories around as good as Too Many Ponies! And unlike many books in the genre today, the book will appeal to both girls and boys. A highly recommended read for all.

I would rate this book as 5 horseshoes - EXCELLENT


You can vote for the book and read comments on the ponymadbooklovers chat forum review section
Posted by Claire at 19:22

Check out the website for a chance to win a signed copy of the book!

I've entered the competition to win this but I'll probably buy it if I don't win. I loved Grounded.