Not as good as I remembered...but still a classic! 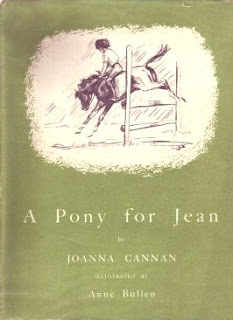 This is a copy of the review I recently did for A PONY FOR JEAN by JOANNA CANNAN on the ponymadbooklovers website Please feel free to add comments here or on the website.

When Jean’s rich father falls on hard times the family must move to a cottage in the country. But Jean soon finds life actually becomes more enjoyable. When visiting her cousins Jean falls off one of their ponies and then confesses she cannot ride. They give her a scrawny mistreated pony whom they had rescued but now don’t know what to do with. They call him The Toastrack as he is so skinny, but Jean re-names him Cavalier. After a lot of loving care and attention, Cavalier improves a lot. So does Jean’s riding. Although the cousins tell her he can’t jump, one night when their house is burgled and Jean rides him for help, he jumps a stile. Eventually Jean persuades him to jump in cold blood and he becomes quite a nice little jumper.
Jean does not really get on with her cousins, especially Camilla who is a superb rider but is a little obnoxious. The only one who is quite nice is Guy. After a humiliating pony club rally when she is classed with the ‘tinies’ Jean is determined to do well at the Pony Club gymkhana. Her mother tells her she must not enter for the jumping as they will be too high for her, but she is disappointed as that is Cavalier’s forte. She secretly borrows money from Guy to enter on the day.
She does well at the gymkhana and when celebrating with an animal’s fancy dress party the cousins turn up and she realises they are not as bad as she thought after all. There is a slight crisis when it turns out her father has regained his fortune and got a new job - but when she finds out she won’t have to leave the country and move back to London Jean is happy.

It has been many years since I read this book, but I lately decided to re-read the full ‘Jean’ series. I have to say I was slightly disappointed, as the series does not compare favourably to her other works such as I Wrote a Pony Book and They Bought Her a Pony. The main gripe with the story is that the plot is unoriginal. However, this is ironically the one point we cannot really criticise it upon. Why? Because of the era when it was written. To the modern reader who has read hundreds, if not thousands of pony stories, the plot of a girl improving a seemingly hopeless pony and her own riding in order to win at a gymkhana, is hopelessly jaded. However in the 1930s when the book was first written, most pony books were Black Beauty-esque tales, told either from the pony’s point of view, or mainly concerned with the life of the pony rather than the people in the story. Joanna Cannan, and one or two other authors of the time, began to explore a different sort of pony story: that seen from the viewpoint of the rider rather than that of the pony. So in reality, the plot was actually fairly revolutionary for it’s time!

However, even if we cannot criticise the unoriginality of the plot there are a few holes in the story which I must point out. One of the main criticisms is that Jean, having only ridden on seaside donkeys or ponies, and with no instruction, manages not only to learn to ride well enough to win the jumping in a gymkahana, but also to train a green pony to jump, (a pony it must be remembered that her cousins – all experienced riders – could not). This is fairly unbelievable. If we compare the book to a similar novel written about the same time – Jill’s Gymkhana – Jill actually has the help of an instructor in the form of Martin, and even then she does modestly well at her first gymkhana. Jean’s rise is just too meteoric to be believable.

The horse element of the story lacks the realism which Joanna’s daughters, the PTs, brought to their books. There is very little emphasis on the actual training of horses, or the ins and outs of riding. Jean trains Cavalier to jump by leaping over jumps with him following and giving him oats. Not exactly scientific – and Major Holbrooke would be rolling his eyes! The author probably wasn’t hugely experienced when she wrote the book; her daughters had ponies so she obviously knew the basics but she either did not share their in-depth knowledge or just did not consider it worth while putting in a book. To be fair, the instructional element in pony books did not really appear until a generation later (and was in fact pioneered mainly by daughter Josephine) but in my mind the lack of reality in the pony element is a little disappointing.

The book unfortunately ticks the box of that main criticism of the pony book genre: it is solidly middle class. The family has supposedly fallen on hard times but is living in a detached cottage with its own orchard and stables. Like Jill and her mother in Ruby Ferguson’s book, they also still have a ‘daily’ woman who comes in to cook and clean for them! The class boundaries are firmly in place. When Jean calls a gamekeeper ‘my good man’ it offends the modern reader, but was quite normal behaviour in that day and age. The ‘jolly hockey sticks’ type tone of the book also palls slightly at times and the author has an irritating habit of italicising: you can lose count of the number of time Jean shrieked or screamed at her mother or flew somewhere or commented that something was awful. (And this fault if anything is worse in the sequel!)

However, despite the criticisms, this is in no way a bad book. In fact it is very well written, well-observed and highly readable. The book is written in an irrisistably humourous style which carries the reader along effortlessly. You at once warm to Jean, who although not the most exciting character in the world, is extremely human. The fact that it is written in the first person does help with empathy but it is mainly achieved through the skill of the writer. All the little annoying quirks of life appear, like items disappearing and reappearing in unlikely places, things going wrong when you are in a hurry, etc, etc. And they are all described with a resigned humour which is reminiscent almost of a stand-up comedian.

Although this is in no way a deep or soul searching novel, we do get a glimpse into the interior life of Jean. One of the most striking observations she makes is how sometimes we fail to speak up when we should:

“Sometimes, when you are among strangers….you can’t say things, especially when they are very important and matter awfully. In fact the more important they are the more difficult it is to say them.” (Page 65)

There are lots more observations like this and it is due to the skill of the author that these sections do not stand out clumsily from the rest of the narrative, or sound preachy: either of which outcomes could have resulted from a less competent writer.

Along with her hmourous, though insightful, observations on life, one of Joanna Cannan’s talent’s was her skill in creating character sketches. Aunt Daphne, for example, is a brilliant comic creation, but so true to life: that sort of person who is always talking about fluffy little animals but would run a mile from the reality of looking after them. Joanna Cannan is also adept in her lightning quick sketches of minor characters, for example giving the competitors at the gymkhana names which sum them up, such as The Polite Boy, The White Mice, etc. In this way she makes it more interesting to read, without having to go into too much detail and spoil the narrative flow. Gymkhana scenes are perhaps the hardest to write as they can easily become boring or monotonous. I don’t normally find them very entertaining but in this author’s capable hands the gymkhana reads as easily as the rest of the book.

Fortunately in her later books, the author was to concentrate more on her strengths, and that narrative style and humour was to be coupled with much more interesting plots and more in-depth exploration of character: all of which seem to come together in her brilliant I Wrote a Pony Book. However A Pony For Jean is definitely worth a read for it’s charming style and for the fact that it was at the forefront of the rider-centred pony book as we know it today, and as such is a classic of the genre.

It is also interesting to read Joanna Cannan’s books and see much of her style (both good and bad!) appearing in her children. The humour appeared mainly in Josephine, the insight in Diana and the readability in all three. Her daughters were to build upon her beginnings and bring a further depth and realism to the pony genre, but Joanna will always be one of the pioneers!

NB - To see the review on the ponymadbooklovers website, vote for it and/or add comments please click here
Posted by Claire at 18:50 No comments:

As of today have added a few new authors. These include some European authors as well as some who write for the Stabenfeldt/Pony Club publishing venture. I will be concentrating on these two areas, plus some American authors, for the next few weeks. The full list of authors added since the last update is:

Due to the fact I am practically snowed in at the mo, I will hopefully be able to add quite a few more over January.
Posted by Claire at 22:34 5 comments: