Monica Edwards Q and A with John Allsup, creator of www.monicaedwards.co.uk 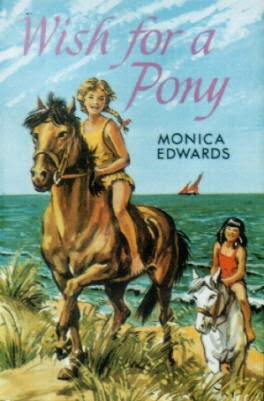 We recently featured Monica Edwards as our chat forum 'Author of the Month' and I asked people to send in their queries and questions about the author, her books and her characters. John Allsup, creator of the excellent and comprehensive website  www.monicaedwards.co.uk , Monica Edwards afficianado and friend of the Edwards family, kindly agreed to try and answer them for us. So for everything you ever wanted to know about Monica but were afraid to ask please read on....

Tamzin / Lyndsey - both heroines were based mainly on the author's daughter Shelley, with Tamzin expressing Shelley's more adventurous side, whilst Lyndsey the more introspective side. John Allsup thinks there was also a large dollop of Monica herself in there!

Meryon - The popular hero of the Romney Marsh series was according to Monica in an interview with Jill Goulder, based on a young man she knew named Maurice Watts. In John Allsup's mind the character of Meryon may also have included elements of another young man of Monica's acquaintance called Charlie Southernden, a good-looking fisherman. Sadly both these men died young, Charlie being drowned in the lifeboat disaster of 1928.

Rissa - Tamzin's best friend was based upon a friend of Shelley's called Anne. Like Rissa, her parents wanted her to be ladylike and prim but tomboy Anne escaped to be with the

Dion, Peter and Diccon -The boys were also based on real-life people. Dion was inspired by the son of ome friends of Monica, and the two younger boys were based on her son Sean,

A lot of the animals were also based on real life horses and cats.

What happened to Badger Valley when Monica died?
The valley beloved by the author is now protected by The Woodland Trust who make sure the valley cannot be sold or developed.

Did Lindsey ever get the polo pony she was supposed to be given as a reward?
This was mentioned in No Mistaking Corker but the polo pony never materialised. Possibly because the Punchbowl Farm series proper began with Black Hunting Whip when radical changes to the characters were made (see question below). Corker is in a way should be read almost a stand alone story without connection to the others in the series.

Why is Dion younger than Lindsey in No Mistaking Corker but older in the rest of the Punchbowl series?
It is assumed because Dion was to take on the role of 'farmer' in the series that as 2 years younger than Lindsey he would be too young for the role, this needed a more mature character. As  noted above the Punchbowl series proper really started with Black Hunting Whip and there was a lack of continuity between Corker and the rest of the series.

Did Monica Edwards realise how popular her books were or is the popularity only a recent thing sparked by websites and the internet?
Her books were actually very popular at the time they were written, if not as widely publicised as the likes of Enid Blyton's stories. Many of her books had a number of reprints and a lot were published by the Children's Book Club who only published well known children's authors. She won awards for her writing. Her book No Entry was dramatized for radio and some of her books were serialised in the Collins Magazine, a well regarded periodical of the time. Monica herself did not consider herself to be a great writer but she certainly knew that many children loved her books and that they were popular.

Which is the hardest book to find in the series?
Although the rarer titles are slightly easier to find now than a few years back due to Girls Gone By reprinting them in paperback recently, some of the books are still very hard to get hold of. The GGB reprints were not large print runs and some of the older ones are becoming elusive. The hardest to find title is probably The Nightbird, especially in a hardback edition. Storm Ahead and Hidden in a Dream can also be tricky titles to find.

What is your favourite Monica Edwards book John and do you prefer the Punchbowl or Romney Marsh series?
John's favourite ME book as a teenager was No Going Back, but now he thinks it may be Summer of the Great Secret, however he finds it hard to pick a favourite as it depends on his mood which of the stories he likes to read! He does not have a preference for either series.

Many thanks from all the ponymadbooklovers for John's help in answering these questions and giving us all a deeper insight into the world of Monica Edwards and her books.

Please feel free to post any further questions you may have on the author or her books and I will pass onto John.