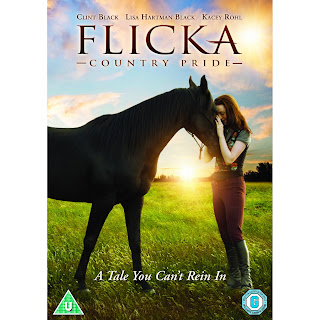 This is my first attempt at a film review! Perhaps not an obvious choice for me, as I have rather an obsessional tendency to view films or read books in series order and it is not in character for me to watch the third instalment of a film series first! However, last night, as I was perusing the pages of a new film streaming service for which I have a free trial, I came across this and thought I'd give it a go.

In the film cowboy Toby (Clint Black) arrives to work as temporary yard manager at a struggling stableyard owned by the recently widowed Lindy (Lisa Hartman) and her teen daughter, Kelly (Kasey Rohl). In exchange for wages Toby is boarding a number of his horses at the stables whilst his own ranch is being repaired after a fire. One of these horses is the titular Flicka, a feisty black mustang. Since her father's death Kelly has lost interest in horses and has become withdrawn and insecure, but she soon bonds with Flicka, who also inspires her to start riding seriously again. When a member of the team training at the yard for an upcoming three day event is injured, Kelly steps forward to take her place. However rich girl Stephanie is jealous of Kelly's riding prowess, and of her growing friendship with good-looking male team member Briggs. Her jealous antics result in her rich mother taking her horses away from the yard. At the same time Lindy's trainer also jumps ship to a new stable and sets up a new team including Stephanie. Briggs decides to stay with Kelly and the pair cobble together a team with a new girl at school and a local teen groom, also persuading Toby to act as their trainer. The oddball team set off to the three day event aiming to prove they can compete on equal terms with their richer more priviliged rivals.

The Flicka film franchise, beginning in 2006 was originally based on Mary O'Hara's book My Friend Flicka, which had previously been made into an excellent film back in the 1940s. It was clearly time for a re-make but for some reason a number of huge changes were made. The young male hero of the original book and film was transformed into a teenage girl and Flicka herself was transformed in colour to black, obviously a hue associated more with that 'magnificent beast' the horse! Mercifully they at least kept her a mare! As I mentioned earlier I have not watched the re-make, mainly as I felt it was a travesty to tamper with such a classic book and film as the originally. However it was a surprisingly successful film, especially when released on DVD, spawning two further sequels.

Flicka 3, unlike the first instalment, does not suffer from any comparisons with the original. It actually bears no resemblance to that story at all. Like the Black Beauty TV show of the 1970s, the only similarity is the name of the horse. Instead, it is a fairly stock horse film aimed mainly at teenage girls, including the obligatory horse competition, teenage angst and first romance.

It's actually not a completely terrible film, despite including almost every equine film cliche known to man and beast and having more cheese than Wallace and Gromit could shake a stick at! I must admit I had to suppress a shudder as the intro titles came up and Flicka was described as a 'magnificent creature'  - an epithet few who have had anything to do with real life horses would ever use. And of course there was the usual rearing, pawing the air and neighing constantly by our equine heroine to endure - behaviour which of course must be displayed by such a 'magnificent creature' but which I have rarely seen in reality. The characters too are fairly stereotyped - the rough rugged cowboy with a heart of gold, the pretty but nasty rich girl, the heroine with natural riding ability. Like a lot of American horse films, it also suffers from slight over-sentimentality. The acting is moderate but adequate, typical of the made for DVD fare this so clearly is.

A quite glaring fault for anyone horsy watching the film is the 'dumbing down' of the equine side of things, obviously utilised to include a mainstream less-horsy audience as well as the horsemad teen viewer. The training for the three day event for example is ludicrously simplified, especially when the cowboy hero takes over as trainer. I had to giggle as he miraculously turned the hopeless riders into dressage stars by simply having them trot around to a country and western song! It is world's away from the realism of for instance the eventing film International Velvet, and while no-one would expect a more family orientated mainstream film such as Flicka 3 to go to such lengths of realism, a little input by someone who actually had experience in training and competing would not have gone amiss!

However despite the aforementioned faults, the film, like all good traditional pony stories, offers some good values. The heroine, although a bit wet, is sympathetic and easy to root for. The message that hard work and dedication to a cause will enable the less fortunate to compete on equal terms with those who are priviliged and rich, is a good one in this modern world where riding is becoming an increasingly elite and shallow past-time. The team of outsiders - the rough and ready cowboy trainer, lowly groom, social outcast speccy girl, etc - compete on an equal footing with the snooty rich team. The competition ending is actually not badly done at all, with realism tempering the usual totally schmaltzy and unbelievable Hollywood finale.

In short this is a fairly innocuous film with nothing much to offend, and including some good messages for youngsters. It will certainly keep younger horselovers happy enough. It offers very little in the way of psychological depth or profoundity and is certainly no classic. For older watchers or those with more horsy experience it will fill in an hour or two and give a few unintentional giggles.

Next up on the film agenda, and linked to this film, is the chat forum film club viewing and discussion of the original Flicka film My Friend Flicka and the first in the first in the newer Flicka series. The two films will be compared and it will also be interesting to see if there is any link to Flicka 3.