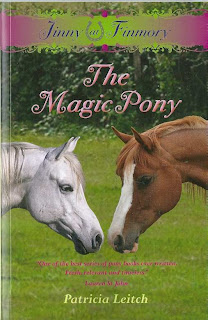 The 7th book in the Jinny at Finmory series.

In this instalment in the series (which can be read alone but will be appreciated more if the other books are read too) the young heroine Jinny is looking forward to many happy days riding her beautiful Arab mare Shantih on the wild and magical Scottish moors and beaches of her home at Finmory. But, after jumping Shantih over a dangerous obstacle which causes her horse to go lame, things begin to go wrong. The vet does not seem to be able to cure her or even find the direct cause of the lameness.

After weeks of being unable to ride her beloved pony and feeling terribly guilty for causing the problem in the first place, Jinny is determined to find someone else who can help. When she hears there is a riding school in a nearby town she goes there in the hope that the woman who runs the place can give her some advice. But when she arrives there she finds the place is a filthy dump and the ponies are overworked and underfed. She is particularly drawn to Easter, an extremely old grey mare who must have been a beautiful show pony in her youth. Jinny realises that she must come up with a plan to rescue the pony from the terrible life she leads and give her a peaceful retirement.

Meanwhile she is also drawn into helping the mysterious old gypsy woman Keziah who has been taken to hospital but wants to return to her beloved moors where she can die in peace. Soon Jinny realises that the fates of Keziah, Easter and Shantih are all inextricably bound up together.

Having grown up with the Armada paperback editions of the Jinny series, I was pleased when I heard it was being re-published by Catnip. I was recently asked by them to review their latest reprint in the series, The Magic Pony, and here is my review of that particular edition.

For me, this is a magical story in what is perhaps the best series of pony books ever written. Certainly it is one of the most popular, with generations of readers of all ages drawn to the fascinating and mysterious world of Finmory and its ponies.

At the heart of the series’ popularity is the character of Jinny. If you are a pony mad youngster (or were one once!) Jinny is an embodiment of everything you will feel about horses, growing up and the sometimes stifling and confusing world around you. The reason for Jinny’s success as a character is that she is amazingly realistic, especially compared to some of the stereotyped two-dimensional creations in many children’s books. Nor is she one of those unreal creations - a mixture of child riding prodigy and designer clad model – which seem to be appearing with alarming frequency in modern pony stories. No, she is a real person with real good qualities and real faults, which teenagers, (or  indeed anyone who has ever been a teenager), can relate to easily. Her imperfections can sometimes be irritating and at times the reader may dislike her as much as love her, but this only serves to make her more realistic and in the end more sympathetic (for who likes a perfect know-it-all?) And if the reader is honest they will perhaps acknowledge similar imperfections in themselves!

In this story both her good and bad points are highlighted. Shantih’s lameness is caused by Jinny’s stupidity and thoughtlessness. Anyone who has done something without thinking and caused a loved one pain in doing so will understand Jinny’s sense of guilt and recrimination. But just as doing things without thinking is one of Jinny’s worst faults, so her compassion and bravery are her best qualities. When she faces up to her fears to both help Keziah and rescue the ill-treated pony Easter, her actions show that all of us, even with our own faults and imperfections, can achieve something in life by showing courage and kindness in helping others.

As well as a great central character in Jinny this story has everything integral to a fantastic pony story. There is excitement and danger as Jinny attempts a daring rescue of Easter. There are realistic problems to overcome which children can relate to, such as getting into trouble at school (for doing horsy stuff instead of homework!) and an annoyingly perfect older sister to contend with. There are emotional ups and downs, from sadness and fear to exhilaration and joy and wonder. And there is of course that element which is integral to any proper horse story – the love of a child for a horse. If you are tired of stories in which the horses are treated as soul-less winning machines, then you will love this story of a girl who genuinely feels a bond with horses, and experiences that special magic which only a relationship with a pony can create.

The characters are all three dimensional and believable and the world of Finmory is brought to life in such a way that generations of readers have longed to live there themselves. But despite being at heart a very realistic story, there is also a thread of fantasy which runs through the book, as the power of the mysterious Red Horse and the magic of the old woman Keziah adds an extra dimension. Unlike many modern pony stories, this fantasy element has not been shoe-horned into the book in order to appease the modern Harry Potter/fantasy-loving generation, but is integral to the plot, and in fact to the series as a whole. It is a strangely down to earth and believable magic which seems to be as much a part of the Scottish moors as the heather and stones themselves. A down-to-earth quality coupled with magical moments is what makes this series so unique and so appealing.

Another amazing quality of all the books in this series is that they appeal to adult readers as well as children. I have read the books as both child and adult and if you enjoyed the series as a child, you will find a different level of enjoyment and interest when reading it as an adult. You will appreciate that the book is superbly well-written, with a style and grasp of language uncommon in children’s books. You will also realise that there is a great emotional and depth to the stories in which important issues are explored at a deeper level beneath the story itself. One of the main concerns of the book is that of ageing and coming to terms with death. Throughout the course of the book Jinny is forced to confront mortality for the first time:

"... for it was not only Keziah who was dead , not some strange, special thing that had happened to her alone. This dying was a common thing, it happened to everything that lived; some day all her family would die, Jinny would die and even Shantih." (Page 196)

The ageing human Keziah and pony Easter are paralleled cleverly, as is Jinny's mission to make their last days pleasant. However although this theme is explored in a thoughtful manner, it is blended seamlessly into the story itself without becoming too heavy or boring for younger readers. I also like the fact that things are not always laid out in black or white, or over-simplified. The character of Brenda who runs the awful riding school would have been a mere evil stereotype in the hands of a lesser writer. However, the book instead explores how she started out as a pony mad girl just like Jinny and ended up in her terrible situation through circumstances. She has hardened her heart to the horse's suffering but is still seen to have compassion and guilt at their plight, shedding a secretive tear over Easter. One again, perhaps this complex exploration of a character will be more appreciated by the older reader, but I do think even younger readers will pick up something of the nuances and it may make them think a little.

For horse-lovers of any age this series stands far above the multitude of mediocre pony stories out there. I have read thousands of horse books in my time and can honestly say that these are amongst the best pony stories I have ever encountered. Each time you read the story you will find something new and exciting so that these are truly books you will want to read again and again.

Lastly, a quick word about the Catnip editions themselves. These are quality paperbacks with excellent printing and very attractive cover art, featuring a beautiful new cover model who is equally as stunning as the original Arab from the old Armada covers.

The Magic Pony is the first of the Catnip reprints I have read and I was very happy to read in the Editor’s Note that the book has not been revised but contains the original text. This was a great decision by the publishers as the book has not aged at all and if anything, because the author was ahead of her time in many of her views on the environment and alternative lifestyles, it is perhaps even more pertinent to the current times than it was when written. It also means that the original style of the book has not been adultered by clumsy updates and editing as in so many reprints.

These editions are therefore an excellent choice for both new readers of the series and anyone thinking of replacing their tatty old copies of the books.

I love this series. Are you still going to do a Patricia Leitch website Claire?

I still want to do the Patricia Leitch site but its getting the time! Hopefully one day...