Guest Blog by Tintin: Book Review - The Most Horrible Pony by Lynda Kelly

Thanks to our guest blogger 'Tintin' who will hopefully be reviewing a number of books on here in the future. Here's his take on the first book in the Amy and Clown series by Lynda Kelly - The Most Horrible Pony: 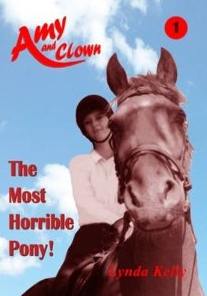 "It has to be said, before anything else, that this is a very accurate title. Clown is a truly dreadful horse and his misdemeanours are marvellously and vividly described. He puts off his rider, runs away, refuses to be caught and bites as well as being able to undo the bolt to his stall. He also does all these intermittently in such a way as to lead both reader and rider into a false hope that he might have reformed.

He is very like a horse in the Army before the war who gained himself such an infamous name by similar behaviour he was still being talked about over 50 years later. Like the military horse Clown also has the annoying habit of behaving perfectly when anyone important is about. Clown’s awful behaviour and the fact that he has been saved from the slaughter house makes it quite a shock to find he is only five rather than an elderly horse “steeped in vice”. It is quite original to have what s almost an equine “anti-hero”.

Amy, the young girl who is the heroine of the novel, is Clown’s exasperated, yet doggedly determined rider. She lives on a working farm with her mother and father, younger brother Liam (and his ever growing tribe of imaginary creatures), dog Tess and two cats. The farm and its work are nicely depicted as are the dynamics of the family which become even more interesting when an eccentric aunt comes to visit. There is also a nice crowd of riding school children and their ponies.

Amy has just received Clown when the story starts and all the ponies have more attractive characters than his (I particularly liked Gordon, the patient Highland Pony). Clown, however, does have an aptitude for mounted games.

The book has a truly memorable horse and interesting likeable characters. Not least among its charms are the sketch maps which help us to enter a complete and believable world. Well written and with good values (a central motif is about loyalty to, and understanding of, friends and family who can be annoying – not to mention a horse who can be very annoying) the book deserves to be popular with its target audience. The author has set herself a hard standard to keep up to.

With all this to praise it is almost superfluous to speak of the plot. The story is a variant of the missing race horse cliché, but because of the strengths described above this is carried off convincingly. The author also pulls off the difficult trick of starting the story by dropping you in the middle of the action.


You can read more  and vote on the book on the chat forum
Posted by Claire at 22:58

I MUST get round to reading these books so I can add my own comments!