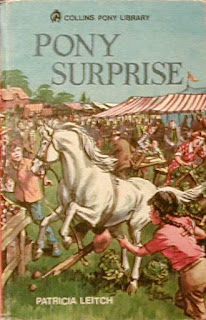 Penny and Ewan are a ponymad but ponyless brother and sister. To their joy, their neighbour finds herself housing a friend's Highland pony for the summer in her field, and, knowing nothing about ponies herself, asks the pair to look after him and ride him. But when they meet Augustus the children's dreams turn into a nightmare - as he is the most unco-operative, grumpy and naughty pony imaginable. Despite this they attempt to train him and ride in pony club events, gymkhanas and the like, causing a string of disasters and mayhem as they go! But just as the children are beginning to despair of ever having a decent pony to ride, Augustus gives them a couple of surprises!

Although this may be considered one of the author's lesser works, and certainly has less depth/character insight than for example the Jinny series or A Dream of Fair Horses, neverthless it has a lot going for it. I'm awarding it 4 horseshoes, and at least one of them is for the character of the dog-loving Augustus, who has to be the most cantankerous, self-willed and truly awfully behaved equine in pony book history. But at the same time Leitch makes him strangely loveable. It brings back memories and a kind of rueful nostalgia for me of some of the terrible ponies I ended up riding as a child. A far cry from the expensive, well bred horses or ultra-talented ponies which appear in many pony books, but which most of us readers never have access to in real life. I think most of us have known an 'Augustus' sometime in our life. Although the viewpoint is mainly from the character of Penny, we occaisionally see into Augustus' head, which is quite a nice touch and adds to the humour and his character. I love his thoughts the first time we meet him:

"It was not the first time Augustus had met children with a gymkhana look in their eyes. In his long life Augustus had often had to deal with such children. He knew that the best place for a pony was standing in its own little field grazing and one of the worst places for a pony was dashing madly around at gymkhanas. In his well-ordered life Augustus has seldom allowed this to happen to him. He chewed a sweet mouthful of grass and checked again on the two children who were still staring so rudely at him. He didn't think he would have too much trouble sorting them out..."  (Page 13)

The moment we read this we get a delicious sense of anticipation that there are going to be all sorts of fun and games ahead in store for the children and for us, the readers.

As well as Augustus, I also really like the character of Penny who is very sympathetic. In some ways she is a similar character to Augustus in her stubborness. She has quite a will of her own and tries to pit it against that of Augustus. To no avail - but she keeps on trying!

Another real strength of the book is it's humour throughout. If you are feeling a bit down this is definitely one I'd recommend you to read. (Another one is JPT's Pony Club Camp) Most of the humour comes from Augustus and the mayhem he creates, but there are also eccentric adult characters thrown into the mix too, giving a mixture of pure slapstick and subtle humour.

Perhaps not a classic, but certainly a classic pony character in Augustus, and a real feel good read.

Read more and vote on the book: here
Posted by Claire at 14:44

Great post i must say and thanks for the information. Education is definitely a sticky subject. However, is still among the leading topics of our time. I appreciate your post and look forward to more.