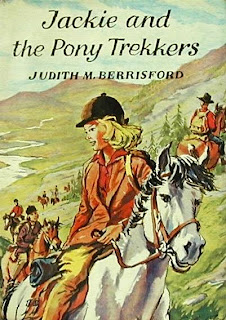 I have recently been re-reading (almost) the entire Jackie series in an attempt to sort out the series order. Whilst I have been reading I have realised that Jackie (and Babs too) do not have a very good time of it with men. In so many books in the series they seem to be at loggerheads with some man or boy whom they admire but who emphatically does not reciprocate the feeling!
We see this first in Jackie and the Pony Trekkers in which the girls get up the nose of John who runs the Pinewoods Trekking centre. Despite doing a load of stable work, helping with the trekkers and lending the centre their own ponies the girls irritate him to the extent he sends them packing! Then the hapless pair encounter another hostile male in Jackie's Pony Camp Summer. They so antagonise Paul, one of the brother's of the camp's organisers that he runs off with his pony to get away from them! In Jackie on Pony Island they go out of their way to help a family who are trying to raise money by giving pony rides on the beach. Despite giving up their holidays to help and lending their ponies for the beach rides, Dave, the elder brother of the family is constantly exasperated with them, and like John at the trekking centre decides to give them the boot. 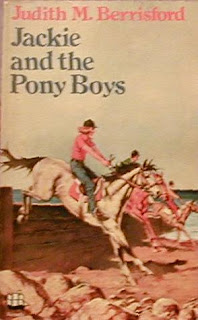 But perhaps the book in which the girls excel themselves is Jackie and the Pony Boys in which they manage to annoy not just one but three boys! After the girls have finished with them one of the boy's ponies has been lamed, Patch has caused havoc, the girls have sparked off a fight between two of the boys in which one of them falls down the stairs and knocks himself out, and Jackie has managed to accidentally knock another one of the lads down a mine shaft causing him to sprain his shoulder and putting him out of the riding competition he had been training for all summer. Despite all this, one of the boys is actually quite friendly to the girls and they, no doubt shocked that a male actually likes them for once, end up fighting over him and not speaking to each other!
Makes me wonder if JB really liked men all that much as so many of the male characters in her books were irritating, touchy or ungrateful. And it is clear that in the end Jackie and Babs will always win the battle of the sexes by rescuing or in some way saving the bacon of the man in question. (Instead of thumping them which is what I probably would have done!)

They save John from a fire, Dave is rescued from drowning and Paul gains his nerve again only after galloping off to save Misty. The girls even somehow manage to placate all three of the Pony Boys in the end!

It somehow seems fitting that Jackie and Babs stayed the eternally youthful age of around fourteen over the 26 years the series spanned. If they could cause so much trouble with men at that age I dread to think what havoc they could have wreaked on the male population if they had ever grown up!
Posted by Claire at 03:20