Pony books and the e-world...

You can't get two further extremes than the modern hi-tech phenomenons of Myspace, Facebook and Bebo and the old-fashioned golly-gosh world of the Jill pony books created by Ruby Ferguson. So it may seem rather anachronistic to find a facebook group devoted to our pig-tailed heroine. 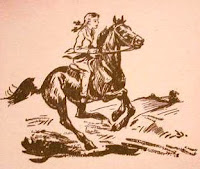 I was a little surprised myself when I was contacted by it's creator.
But on second thoughts, why not? After all my website (and indeed this blog) is devoted to pony books. Although the internet may be criticised for its detrimental effect on social interection and more traditional past-times such as reading, in my experience it has actually had a benefical effect on the world of pony book sand their readers. Through ebay, many people have been able to find old childhood favourites which they had previously thought they'd never see again. The internet through websites and forums, such as
my own, has brought together like minded pony book loving people. How many times have I been told 'I thought I was the only adult mad enough to still be reading pony books?' I thought that way myself until I met lots of other grown up 'pony book nerds' through the power of the internet. And of course the net is unparalled in its ability to provide information. I (and hundreds of others) have learned so much more about the books and their authors since using the web to access this info and contact other interested people. In all ways the internet has improved the life (and in many cases the book collection!) of the average pony book reader.

So why shouldn't Jill have her own facebook group? And maybe even her own Myspace page and blog! After all when you think about it, the web really can be 'wizard!'