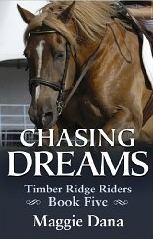 It is very hard to believe we are now up to Book Five with the Timber Ridge Riders.

Each book manages to be re-assuringly familiar as we return to the stables, but with each volume we learn more about the place and its inhabitants, human and equine.

With each review that also means that I have to praise the series solid consistencies. It gets harder and harder to do this and maintain any pretence of originality. The structure of the books remains an inspiringly solid and durable skeleton on which to build the flesh of a story and a strong foundation which can bear new characters easily.

Each book in the series is, however, refreshingly different. This one is very much focused on the interplay of the characters. Angela the villain is very much centre stage in this book. Any fleeting glimpse of reform we had in the last book is well and truly blotted out in this one. This is absolutely first class villainy.

The centre piece of this event is a hunt chase competition in which Kate is placed in a pair with Angela. They win, but only because Angela has cheated. Kate reveals this causing Angela to thirst for revenge. There is both horse story and school story here.

At the same time, if this story were not enough, Kate’s father returns from South America threatening to totally disrupt her life at Timber Ridge. We also have a new character in Angela’s likeable little sister who becomes lost on the mountainside and has to be rescued by Kate and her horse, Tapestry. The rescue is particularly thrilling.

The author sets a lot of hares running in this book, particularly relationship wise, so there is plenty of action left yet at Timber Ridge, which is good news for us fans. There is also the potential growing for a very bad mis-understanding between the two main characters, Kate and Holly.

The book is very fast paced. I read it on the Kindle for P/C application and when I read this I narrow the screen as the full screen is so wide it makes me feel like one of those lizards with eyes pointing in different directions. Due to this there are no page numbers so when I got near the end I could not believe it. The book really does keep you reading as you want to know what happens next.

A joy to read.


Read more and vote on the book in the ponymadbooklovers forum review section
Posted by Claire at 12:32