Review - Joe and the Hidden Horseshoe by Victoria Eveleigh 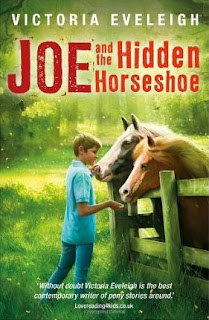 This is the first book in a new trilogy about pony-loving boy Joe. It is aimed at the pre-teen to younger teen readership. The other books in the series include Joe and the Lightning Pony and Joe and the Race to the Rescue (not yet published).

Joe is dismayed when he has to move away from his home town and all his friends to live on a farm in the country. He finds the countryside boring and takes his frustration out on his family, especially his little sister, and spurns the attempts of the local children to befriend him. Although he has ridden before it is his younger sister and mother who are really pony-mad – he feels that it is not much use continuing with his riding in such a predominantly female world. His mother’s desire to re-create her youthful pony days leads to her buying two unsuitable ponies. Coloured cob Lady is hard to control and Lightning has navicular and can only be ridden very lightly. After Joe’s mum has a bad accident and his sister loses her nerve, nobody wants to ride the ponies! When Joe finds a lucky horseshoe in the garden he is encouraged to wish on it by the Romany woman Nellie. Not really believing , but feeling that he needs some help to improve his lot, he makes his wishes. But is it magic he needs or a change in attitude to make his situation improve?

This is a well written and very readable traditional story. There is a lot to like here and quite a few elements which set the book apart from the run of the mill modern pony story.

The fact that the author has chosen a male lead character is admirable. There are few male leads in modern pony stories, and I have heard many complaints from mothers of pony-mad young boys about this. Victoria Eveleigh has also added in other content which will probably appeal to male readers, such as the martial arts sessions and the technical aspects of shoeing. The book also touches briefly on the problems that boy riders face in a predominantly girly world as Joe asks “Who’d made the rule that only girls should be keen on riding…how could men become jockeys, showjumpers, mounted policeman or anything to do with horses if men didn’t ride?” (Page. 19.) But female readers needn’t worry, all the elements of this traditional pony story will appeal. And there are also plenty of female characters for girls (including grown-up girls!) to identify with.

I also like the various interesting side-elements which are woven into the main plot. Its nice to see gypsies/Romanies portrayed in a good light instead of as the usual clichéd villain! The martial arts element is also interesting, especially the spiritual side of things, regarding harmony and good energy, which I didn’t really know much about. Victoria Eveleigh manages to provide all this background detail without making it ponderous or dull – a very difficult feat. This is not just a few lumps of description bunged in to bulk the book out a bit, but information that is interesting in its own right and important to the story.

The author has added a clever touch of ambiguity with the lucky horseshoe sub-plot. Nellie the Romany tells Joe how to use the horseshoe to make wishes, but there is more to her character than the reader's preconceived notions of gypsy magic. She also gives a lot of practical advice to him about changing his attitude to life and those around him (as does the martial arts teacher), so we are never really sure if, when some of his wishes do begin to come true, if it is because of some sort of magical spell or his own behaviour. We suspect the latter but we are never really quite sure. Also a lot of his wishes don’t come true – will they in later episodes of the story – or were some of them just too ambitious or greedy? We don’t yet know until we read on further into the series. By this ambiguity Victoria Eveleigh has artfully managed to add a slight sprinkle of fantasy into the proceedings which will interest fantasy fans but will in no way turn off those who dislike it.

The characters in the book are well drawn and three-dimensional. I particularly like that there are interesting adult characters. One of my favourites is the Mum. Eveleigh creates a great sub-plot in the grown up pony-mad girl trying to re-create her childhood love affair with ponies and struggling to re-enter that world. After being considered the horsy ‘expert’ by her family, Mum realises she really knows little about keeping a pony or handling one, something I’m sure many adults in the same situation have experienced. The Romany Nellie and the farrier Chris are also very interesting characters. Even the minor characters, such as the Aikido instructor, who uncomfortably uncovers Joe’s selfishness, add extra elements to the story.

The author displays her knowledge of horses well in explanations of horse ailments such as laminitis and navicular, and also of the handling of the ponies in the story. Young readers can pick up much useful information here and it is delivered, not in a didactic, dusty old textbook way, but comes naturally from the words of Chris and Nellie. Nellie in particular offers up some good advice in showing that humans must try and think about how horses are feeling in order to be able to handle them correctly and kindly. An excellent message to pass onto young readers.

My only real problem with the book is that I don’t feel much empathy or connection with the character of Joe. This is not because he is a boy. Some of my favourite pony books have boy heroes and I thoroughly empathise with the extra problems which plague horsy boys. However Joe is to me just not a sympathetic character per se. He is surly, self-absorbed, unfriendly, unkind to his sister (who is certainly not the archetypal annoying little sister seen in many children’s books) – in fact he is a bit of a brat. Yes, he does improve somewhat throughout the book and I do get that the author is making him fairly unpleasant at the start so that he can be redeemed throughout the course of the novel. And I also think that the way he improves when he is made to see it is his attitude rather than external circumstances which are causing his problems is extremely well done. However for me the damage has been done and I never quite warm to the character. I don’t mind an unpleasant character if they have a reason for their behaviour such as terrible parents or a traumatic experience – in fact there is a lot of interest in seeing such characters struggling to overcome their problems and learning to integrate into society. However I just don’t get why Joe is so awful. Yes he has had to leave his friends behind and start a new life. But this and the fact he doesn’t have internet access for a couple of weeks are hardly events of tragic proportions and you’d expect him to start getting over himself in a few days. He really has it pretty good. His parents are decent and supportive and seem to be fairly well-heeled middle-class. People in his new home put themselves out to welcome him, even though he spurns them. Plus the fact he disdains that he has been handed on a plate the dream of many pony-mad but pony-less youngsters – to live on a farm and have ponies of their own – may not endear him to such readers.

However one does not have to love the main character to enjoy the story, and it certainly did not spoil my enjoyment - especially as there are plenty of other interesting characters in the novel. Also, as Joe does improve throughout the book, it is hoped that he will be a much more likeable character in the second and third book of the trilogy and so this small gripe may completely disappear. I’d also be interested to hear what other readers feel about Joe – sympathetic or annoying? Please let me know!

The fact that Joe faces little in the way of real difficulties, does lead me to another minor point. I realise this is personal taste, but I'd like a little more tension in the story. Joe really has things far too easy. He has good parents with no money worries. His move to a new home is hardly a terrible trauma – he doesn’t suffer from the usual ostracization of the newcomer by the local kids – in fact, as I mentioned above, they go out of their way to try and include him. There just happens to be a Aikido class nearby and his potential new friends are members. He bemoans the fact that boys are not welcomed into the girlish world of ponies but he hasn’t really suffered because of this, and the reader doesn’t feel that it really bothers him that much. If you compare him to a similar fictional boy who likes horses, Aiden in Sheena Wilkinson’s Too Many Ponies, who is bullied mercilessly by other boys for his love of ponies, Joe has really nothing to complain about. The problems with the ponies themselves also seem a bit too easily solved. There is no real worry about what will happen to them. To my mind Joe is one boy who doesn’t need to wish on lucky horseshoes as he has a pretty good quantity of luck on his side anyhow!

To be fair, the undemanding, un-melodramatic tone of the story is quite normal in a younger reader’s pony book and the lack of any real tension does not make the story dull or uninteresting, far from it. (In fact in some ways it is a refreshing change from many modern pony books which have an inordinate amount of ridiculously unrealistic events crammed in them to disguise the fact that they are actually poorly written and shallow.) But, for me, if Joe’s problems were just a bit more high-stake this story could have been even more gripping.

In summary, a very good read in many ways and suited to a wide readership. Both girls and boys of the target age will find interest in the story. Its adult characters and added depth of detail will appeal to the older reader. The fairly gentle traditional story will suit most readers, but those who like a little bit of bite in their reading material may feel themselves wanting slightly more tension. However I can guarantee that this book will be a much better reading experience than the average modern pony story. I look forward to reading the other books in the series.

I have rated this book as 4 HORSESHOES – VERY GOOD

Read more, add comments or vote on this book at the ponymadbooklovers chat forum reviews section
Posted by Claire at 20:39