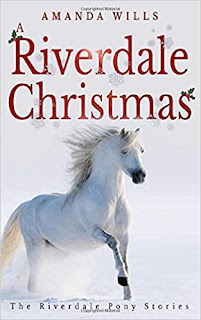 This is the latest in a pony series featuring Poppy, her Connemara pony Cloud, friend Scarlett and younger brother. In this instalment, Christmas is on the horizon. Poppy is eager to become part of the school showjumping team and is horrified when her nemesis Mrs. Jackson, takes over the job of picking the team. How will she ever achieve her ambition now? But when she becomes involved in a charity to help sick children run by a local celebrity she begins to realise that there are more important things in life than her own concerns.

First of all before I start the review I have to say that I am not really a 'Christmassy' person, in fact some may say I should change my middle name to The Grinch! So it takes a lot to make me feel the Christmas spirit. This book, however, I'm pleased to say actually managed it! This story is full of the real message of Christmas, which seems nowadays to be almost lost in all the commercialism and surface glitz: that of spreading love and joy to others. Young readers will absorb this message through the eyes of our heroine Poppy. But it's not by any means done in a preachy or unsubtle way. At the beginning of the story Poppy's main concerns, as befits a young pony-obsessed girl, involve being chosen for a show jumping team and the annoying fact that one of her teachers seems to be picking on her. It's only when she reluctantly takes part in a charity event to help disadvantaged children that she starts to question her priorities and the way she sees the world. This plot-line could have turned the book into a rather downbeat and dreary read but on the contrary the author also celebrates the fact that Christmas can still be fun and full of sparkle. The character of Gaz with his ridiculously over-the-top Christmas decorations, demonstrates that you can be both caring and have fun at the same time. The Christmassy feel of the book is further heightened by the snowfall and the traditional wintry activities such as sledging - and there's even an extra touch of festive magic with the inclusion of a real live unicorn!

As well as the Christmas vibe, there is plenty more for readers to enjoy in this fast-paced story, with lots of horsy action, excitement and some nice scenes between the family members, especially the flashbacks to a family holiday in which we find out a little more about Poppy's character. I also like the way that the author has managed to blend the modern with the more traditional pony story, so it will appeal to both youngsters and older readers. Instagram and media celebrities rub shoulders with a more old-fashioned pony-story atmosphere.

Our heroine Poppy is a very likeable character. She is a really caring and genuine girl but at the same time has her faults and moments of weakness, just like a real person. There are two types of pony book heroine/hero that really annoy me: the perfect 'has a special way with horses' paragon who sets my teeth on edge and, perhaps worse, the whiny kid who complains about everything and never takes a moment to appreciate anything they have or think of anyone but themselves. Thankfully Poppy is none of these, she's a real normal girl with good and bad points, whom we can all relate to.

The book is part of a fairly long-running series and, unlike many series, this one has not lost its freshness and become formulaic. The author adds something new in every book, this one included. The story will be appreciated to the full if you have read the others beforehand but can be read as a stand-alone. Perhaps a touch more general background information on the characters would have helped new readers of the series jump into the story a little more easily, but it's not a major requirement as most of it can be picked up throughout. So even if you haven't read the others, don't let this put you off this great festive story.

All in all I would recommend this as an excellent Christmas read for all ages!

I have rated the book 4 HORSESHOES (very good)


Read more and vote on the book on the chat forum
Posted by Claire at 21:58

In the book Triumph Over Disease, Jack Goldstein, DPM, outlines his true story in overcoming ulcerative colitis by sticking to strict water fasting and a vegetarian diet. Goldstein is one of very few people who has tested his own tongue scrapings, urine, feces, even perspiration during a water fast, Strychacz says.